Armed with a mask covering my mouth and nose, a thirty-kilogram suitcase weighing more than a prehistoric rock and a bag full of books, I stared intently at the mobile phone screen indicating the train that would take me from Brighton to London’s Gatwick airport, my body numb and muscles stiff after weeks of stress. I was finally making my way back to Spain to see my family amidst the coronavirus pandemic health crisis due to the coronavirus pandemic. Many of my friends, however, had not been as lucky. Some governments had decided to close off airspaces before they could buy flight tickets back home, whilst others decided to stay willingly. Travelling during this time was an odyssey, with prices skyrocketing with the ‘cheapest’ flights starting at 200 euros, planes were cancelled and companies went bankrupt. The image of thousands of planes on the runways had gone viral on social networks and media in general. 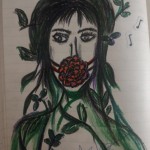 Some didn’t even try to get back home. They decided to go on with their lives in England, despite the circumstances, and abide by the decisions taken by the British government as the situation progressed. There were rumors that they would be sent home sooner or later. Others mentioned the provision of a salary of 20 hours a week, for a month. This would not be enough to live comfortably given that prices in Brighton are similar to those in London. In such instance, they would have deal with the uncertainty which this situation has brought about, just like everyone else. Despite the measures adopted by the British government in an attempt to inject money into the country’s economy during the crisis, living conditions for the majority of Spaniards living there remain dire. Some of whom are bound to a monthly rental contract, which they must continue to pay, despite returning to Spain.

When I decided to return to Granada, Boris Johnson’s government had not taken any action to stop the pandemic in the country. The number of those infected was still unknown and the virus was moving silently through the crowd. The locals were concerned about the latest news from neighbouring European countries, such as Italy, with more than 6,000 deaths at the time, or Spain, where a state of emergency had been declared and people were confined to their homes. More than 18,000 Spaniards were scattered around the globe searching for ways to return to their home country with many being left stranded for weeks. I spent an entire morning calling the Spanish embassy in London, but there was no answer. I assumed that they would be busy, repatriating people in critical situations; hence I opted to fly on a Norwegian air carrier with the hope that the flight would not be cancelled. In such a latter case, I would have any other choice other than keep looking for flights, less and less frequent, and always fearing airspace closure.

The danger of being trapped in England

During that time, I had continuous phone calls from family and friends, warning me of the dangers of being trapped in England without an income. Buying a flight back to Granada or Malaga seemed to be the most plausible decision. As the health crisis progresses, different governments around the world were gradually closing international airspace but in Brighton, life was turning its back on the world.

In Spain the reality was becoming increasingly harsh and dramatic. There were many tears shed of friends who missed the chance of a last goodbye to their parents and many more uncles or grandparents for fear of spreading the disease. There was clapping and cheering at 8pm from balconies to encourage the paramedics in their relentless fight against the virus. There were tons of social media posts, showing screenshots of friends now communicating only through video calls. There were pictures of people wearing masks and gloves greeting each other from a distance to avoid physical contact.

Yet, at the same time in Brighton, the clouds gave way to pleasant weather and a hopeful spring. Just like snails after the rain, the English took to the streets to enjoy the sunny days, the clear blue sky and the cool sea breeze. On any given Sunday, the seafront was filled with families strolling around, bars were full of people drinking, the parks were full of children playing, the shops were open and public transport was often overcrowded. Every morning I was still going to school with enthusiasm, having arrived in Brighton a couple before in order to do my final teacher training at St Paul’s School. I was to be the new Spanish conversation assistant in a bilingual classroom, in which primary school pupils were learning to greet, sing and become familiar with Spanish culture. The students’ pronunciation, when learning new words such as paella or chorizo, often brought a smile to my face. I am very passionate about this work and now I was being given an opportunity to understand the British education system and develop through these new experiences. It was probably this passion for the job that held me back from buying a flight sooner. Deep down I wanted to stay, despite the uncertainty.

One fine day, things started to change. The sun still shone yet, some students started missing class. At first it was ten children, from a class of thirty, a significant number which should have rung a couple of alarm bells. Classes kept going with the usual lessons, exercises and activities, yet, the atmosphere was becoming more and more tense. Many English families made a personal decision not to send their children to school, as rumors of closure were multiplying. Some teachers discussed whether it was better to preserve the economy and risk human lives or would it have been better to adopt the same measures as other European countries. We were facing the unknown.

How’s it going in Spain?

Every morning, Boris Johnson spoke about this world crisis, sending messages of tranquility and reassurance to the British population. Journalists and contributors to the BBC’s morning shows were throwing hypotheses and theories about a virus that was already causing havoc in other societies not so far away. News about increasing victims in neighbouring countries, including Spain, started to take more and more media coverage. Reality started to take over and this threw the British population into panic. There were long queues outside pharmacies, with people frantically seeking to buy masks, hand sanitisers and thermometers.

At school my foreign colleagues had different reactions. German teachers seemed calm, considering the option of returning, but not making decisions as yet. On the other hand, an Italian colleague did not show up at school as he immediately left for home. The crisis took centerstage of all the conversations during recess: “Have you heard the rumors that they are going to close the school? “,” How is it going in Spain?” my classmates asked. “What will the principal do if Boris Johnson doesn’t take action?” others questioned. Tempers began to flare due to the uncertainty of the situation and the silence was more than eloquent. Moods swayed varying from worried looks, messages of tranquility directed at the students and questions from the children such as, “are we going to die?”. Questions, which unlike during usual lessons, us adults had no clear answer to. 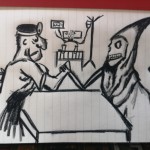 The British government was moving slowly, adopting only preventive measures in order to avoid the pandemic. England was moving in slow motion, under the watchful eye of the world. Boris Johnson was being harassed by critics, but part of the English society remained unmoved, unable to understand why it was necessary for them to stay at home. For many this was simply a faraway “tale” coming from Wuhan, a tale which would not include them as protagonists. As days passed, however, the mockery decreased whilst the worried faces multiplied as the distant reality hit the English society. It was time. Moved by an urge to survive, I decided to return to Granada.

That little bug liked to explore the world

I said goodbye to my flat mate, a girl from Navarra who had come to Brighton to improve her English and was working in a restaurant. We had arrived in England full of excitement and had instantly clicked. Every day we joked about the bloody little bug, yet I also tried to convince her to go home too, as she was working in one of Brighton’s busiest restaurants with people from all over the world visiting, putting her at greater risk. When my time to leave arrive, I finally got on the train to Gatwick airport and I started to shiver. I was feeling sick. “Do I have the virus?” I was mentally and physically exhausted from the hustle and bustle of the last few days, sending boxes of clothes back to Granada, cleaning up the house and fixing paperwork at school. As I took the train, I held on to my mobile phone as my lifeline. It was the only way of communication with my family and even though I was many miles away from home hearing their voice was a relief. 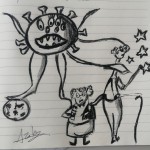 Gatwick airport looked desolate. The second largest airport in the UK was absolutely dead with just a few passers-by wearing masks, waiting for their flight. Most of the shops were closed and the airport’s loudspeaker was the only noise audible in the halls. Planes were parked on the runway without permission to fly, because this little bug seemed to like to travel the world. On my flight we were only 50 passengers in a plane with capacity for 300. Mostly were Andalusians, I figured from the accent. One passenger per row of seats was allowed. No one spoke during the flight; no one seemed to breathe either. The only thing that was breathing was tension. An atypical flight, with hands within our pockets and everyone avoiding touching anything or speaking to anyone. At a distance of more than two meters, there not much chance to talk. No whispering or background conversations were heard. The stewardess welcomed the exhausted passengers on board: “We are happy to be the ones who can take you back home. These are difficult times and we feel the discomfort you have to experience on this unusual flight. We hope that you will soon be with your loved ones”.